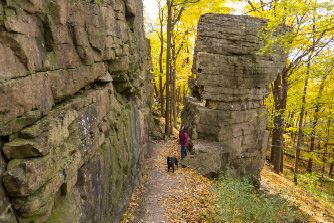 Calumet County does not have any manmade water parks, climbing walls, or plastic tunnels for slithering. What we do have is Wisconsin's largest inland lake, the cliff faces of the Niagara Escarpment, and a series of underground natural caves!

High Cliff State Park is a favorite amongst fitness enthusiasts and historians. With its cliff walls and miles of steep and varied trails everyone from artists to athletes enjoy the park. It has a campground, Native American effigy mounds, old lime kilns, and a wealth of history within the walls of the old general store that still sits in the park. It is located along Lake Winnebago and there is a marina at the north end of the park.

In addition to a state park, there are four state wildlife and natural areas encompassing thousands of acres of prairies, marshes, and woodlands. They draw hunters, hikers, and bird watchers.

The Calumet County Park System adds yet another shoreside campground with a winter tubing hill, nature center with caves, passive lakeside park, and three harbors. The County Park and its marina along Lake Winnebago was once the site of an old brickyard and traces of the yard's history can still be found on site.

A second nature center in the county is tucked quietly in the midst of the Brillion State Wildlife Area offering trails and a marsh platform to view nesting osprey and other wildlife.

In addition to thousands of acres of park land and wildlife areas, there are miles of trails and over 35 local parks offering a variety of amenities from a canoe launch to an aquatic center.