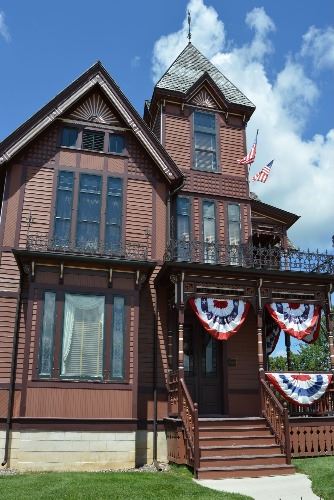 This Greek Revival style home from 1873 was restored to its Victorian elegance in 2007. It is one of the best examples of Stick Style design remaining in the Midwest. The house was listed on the National Register of Historic Places in 1996. It was originally owned by Hermann Christian Timm and his wife Augusta, immigrants from Germany. The house remained in the Timm family until 1974, during which time very few changes were made to the building. The house is restored to its original condition during the period from 1892 to 1906. Guided tours of both the first and second floor take approximately 45 minutes. The house is open Saturdays and Sundays, May through October, from 1:00 PM-4:00 PM or by appointment. It is also open between Thanksgiving and Christmas for the Timm House Christmas. For an appointment, contact the New Holstein Historical Society at (920) 898-5746. Fee is charged for tours.